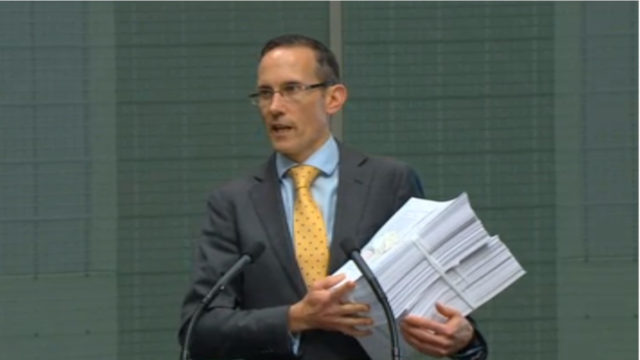 Regulator ASIC has not committed to chasing up firms that have pledged to repay tens of millions in JobKeeper payments they didn’t need, the House of Representatives Economics Committee has heard.

“I have raised the issue [with ASIC] about firms who said they would repay JobKeeper but the ATO hasn’t yet got the cheque,” committee deputy chair, Labor MP Andrew Leigh, told the meeting.

ASIC member Cathie Armour said the response from the regulator was that “ASIC may contact selected companies for evidence of repayment”.

Dr Leigh singled out retail group Premier Investments as one that “has not reported its JobKeeper receipts”. Instead it had bundled up the figure with a range of other wage subsidy measures resulting from the pandemic.

Premier, Dr Leigh said, had not disclosed what “the back of my envelope says – that Premier Investments got more than $100 million in Jobkeeper, unlike almost every other listed company”.

The company’s reporting requirements would depend on the “materiality in the context of its operating position”, responded Commissioner Armour.

“I’m surprised you say it is not material, given, potentially, the under-reporting of tens of millions of dollars,” said Dr Leigh. “Are there companies where tens of millions don’t matter to investors?”

“If I’m a CEO of a big Australian company, I can make a mistake in my reporting which is out by tens of millions of dollars and ASIC is not going to do anything about it?” he asked.

Mr Longo replied “I didn’t say that”, and explained that each situation would be viewed under its own circumstances.

Funds in the gun on collective ownership

“In the context of the Sydney Airport bid, you had UniSuper telling Sydney Airport to essentially transfer the ownership over to a company in which they are an entity [part owner] – IFM Investors,” Mr Wilson said.

This and a number of other bids could be characterised as super fund owners agreeing to be part of a sale, he said, “but only if it’s to a bid that includes them even if the alternative competitive bid would have been better and delivered a better return”.

Such examples “raise an issue about whether these sorts of acquisitions are being motivated by, let’s say, more than the capacity to seek a return in a competitive market”, Mr Wilson added.

Mr Sims responded that the ACCC would look at such deals from a perspective of whether they would result in “a substantial lessening of competition”. If the deal was seen as involving anti-competitive agreements, then the ACCC would want to look at “who’s doing what to whom”, Mr Sims said.

Mr Wilson also raised the issue of umbrella investment groups and proxy advisers magnifying the voices of individual shareholders beyond what they would be in normal conditions. Proxy advisers are consultants that advise shareholders how to vote on issues regarding takeovers and at company AGMs.

“You [ACCC] indicated that when you get to accumulated shareholdings of about 10 per cent it starts to raise questions,” Mr Wilson said. The median investment for members of the Australian Council of Superannuation Investors (ACSI) was around 10 per cent and this had gone as high as 30 per cent “for JB Hi-Fi at a point in time”.

Mr Sims responded that the ACCC had looked at the situation with proxy advice groups but said it was not simply a matter of their influence.

“Have they got a position [where they] are significant in advising shareholders in a competitive firm as well?” he said.

The New Daily is owned by Industry Super Holdings